I met Laz last year at the Llandysul book fair. It was a magical fair in a beautiful setting, and I spent a good chunk of it chilling out with him. He’s far more than an author. He is the creator of Lazzmatazz, but I’ll let him tell you about himself. Welcome, Laz…

How do you write? Is everything plotted, planned to perfection? Do you ever change tack as you go along or always stick to a pre-made plan?

I have an idea and it will develop as a picture in my mind. I am a very intuitive writer and tend to narrate my stories as a character and as such am a real part of it (in my mind anyway). Planning is based around, knowing where I may start and indeed end, but the middle has to evolve within my character’s journey. As an example I wanted to write a story about Crach Ffinnant who was a prophet, seer and interestingly a dwarf, riding with Glyndwr. Little is known about him yet much is known about Glyndwr, so some research and a little creative imagination and he became alive after six hundred years. I wanted him to have been an apprentice and serve a prophecy related to Glyndwr. So I created his life. In the Prophecy I created scenes of the Middle Ages and loosely made it fit historical facts and Crach began his magical journey. I do not have any particular time of writing nor pattern, simply I will binge and finish three chapters at a sitting then perhaps nothing for a week or so and so on. The follow up to the Prophecy, Rise of the Dragon took six months to complete from beginning to proofing. Thanks to winning first prize in a writing competition in February 2018, I now have a formal publisher, published two books in my series and contracted for further volumes. I can sit on a rock, look at the sunset and instantly story-tell, it just flows and that is how I write. When I am in the zone, little thinking but a tremendous amount of story flow!

Cool, do you have any writing rituals? Meditation, certain cup for your tea, writing trousers?

I can write anywhere but I do like my desk with the window to my side and the amazing views of the valley. I tend to use my laptop for everything nowadays but always have a pencil and paper around to jot ideas as I work. A few cups of coffee is helpful but time of day is not important. My only ritual is recognizing my ‘mood to write’

So, aside from writing, what makes you tick? Tell us 5 things about yourself we probably don’t know.

I am also a musician and singer/songwriter and have been playing for forty years. I have done a bit of acting which I really enjoy and also some performance poetry. I have been qualified as a hypnotherapist for thirty years and occasionally do comedy hypnosis shows. I adore dogs.

You’re a great story teller too, if I may say so. Different questions now, iIf you were stranded on a desert island with shelter, food and water, what 5 items would you want with you?

I love that authors need pencils and paper! On said island, what 5 books would you take and why?

‘Course in Miracles’ because it has always filled me with inspiration and is a source of grand inner thought when quiet.

‘Survival Manual’ because I am going to need it.

‘Christmas Carol’ (Dickens) will remind me of my childhood and father reading it year after year. It would help with any sense of loneliness but, I am quite content with my own company.

‘War and Peace’ because I have never read it and will have plenty of time on a desert Island.

‘Conversations with God’ (Donald Walsh) because if there is a God, then I will have plenty of time to converse and find out why I ended up on the desert island to begin with. As long as I was not responsible for sinking the ship of course!

Fascinating choices, thanks for those. Off the island now, which famous person would you like to have dinner with?­

This for me is a no brainer, because it has to be Peter Dinklage. We would be discussing his forthcoming role as Crach Ffinnant, now he has finished Game of Thrones. I did not have him in mind at all as I was inventing the character but he would be just the ticket if ever my series hits the screen. It is a dream, but then so was getting a publisher on merit of my work, not my pocket. But I did after over thirty rejections on the manuscript, so anything is possible, even dinner with Peter Dinklage.

Absolutely! Why shouldn’t we see our book as a movie? So what are your current writing projects?

I am half way through writing book three in the Crach Ffinnant series, ‘Ravens and Dragons’. There are plans for further books related to his adventures during the Welsh rebellion of the 1400’s.

Excellent, thanks so much for joining me, Laz. I’ll add below the places where folk can find you and your work. 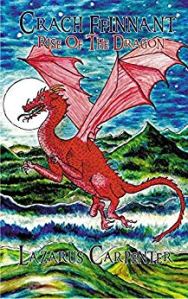 Ballad of Penygraig – Self published with LULU 2015

Don’t forget, if you’re in Wales, you can find Lazarus and myself at Lazzmatazz 2019 in Llandovery. 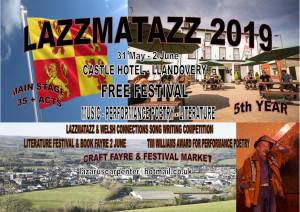