My son Ed is twenty four and suffered from arthritis since the age of 12, culminating in him taking the strongest meds the hospital could give him for the past two years. When I spoke to him last, he had switched his diet from vegetarian to vegan and included juicing and was off all his medication. He said he felt like a young man again. I was overjoyed, of course, and on his recommendation looked into juicing and watched the video ‘Fat, sick and nearly dead’. I can’t begin to describe the film as I’d miss out too much but it’s a great watch.

My partner and I decided to take the plunge, bought a juicer and ordered the book of juices, recipes and advice that accompanied the video.

We had our final meal 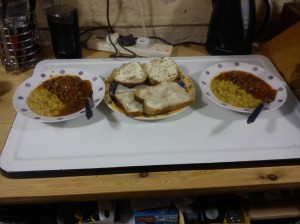 and were ready to fast.

Some background….Mike and I are vegetarian. I make most of our food so we eat few processed and packaged items but, when we saw the video, we were surprised that, balanced against fruit and vegetables, we still ate too much. Our aim was to cleanse our systems and then change the balance so fruit and vegetables, be they eaten or juiced, were to become the major part of our food intake. This leads perfectly to the fruit and veg we want to plant and grow in our raised beds and greenhouse (when they finally happen!)

We tried detoxing while we carried on working…….we were mad! So my first piece of advice once you’ve watched the video, read the book and have your juicer set up is….WATCH THE VIDEO AGAIN! We realised that fabulous Joe Cross spent the first ten days with himself in a hotel room dealing with the detox and Phil was at a beach resort by a lake, but we only realised this on the second viewing. We missed lots of useful advice the first time around.

Not only am I a vegetarian but I eat very little dairy and am wheat intolerant. We don’t drink alcohol and have very few take-away meals. I teach dance classes while my partner lays and sands wood floors and together, we are attempting to renovate the Grade II listed house and byre that we live in and rescue four acres from thirty years of neglect.

Neither of us was carrying much fat so we attempted to juice fast and keep working with very little reserve….the first night I fainted, luckily in the bedroom and was able to get on the floor. So my second piece of advice is, be kind to yourself. For at least five days, give yourself time to adjust, rest…the video says all you want to do is curl up in bed but….it does get easier.

Nearing the end of the third day, Mike needed to drive to Cardigan to give a price for a wood floor and I was wrapped up in layers and a hot water bottle trying to get warm. We felt dreadful and made the decision to add some food at this point. Mike had eggs and in the evening, I made leek and potato soup (loads of leek, little potato;-)) with the broth I made from the vegetable pulp. On the fourth day, we had our fruit juice breakfast, green juice and took our Berries and Beet coconut water to the beach. Home made hummus, crackers, ryvitas, grapes and carrots for lunch followed by Beet delight juice and hot carrot spinach salad (v v hot!!), home made vege burgers and sweetcorn for dinner and apple crumble with nuts and seeds topping for our evening meal. We have continued to drink lots of water. 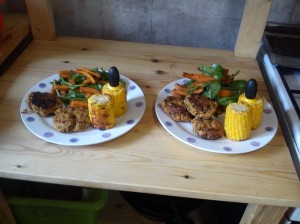 It’s day five today. Coconut water contains electrolytes to help with the dettox symptoms…tricky to know if it works as I’m not feeling great but, the Berries and Beet recipe is delicious!

I’ve learned a lot about the foods our bodies really need and what my body needs to stop it keeling over! Maybe we stopped too soon to get the full benefit of a detox but I’ve been shopping today so I can try the Quinoa burgers and Veggie meatballs recipes, and I’ve bought more kale and spinach. I’ve learned I can’t ‘eat’ cucumber or it repeats on me all day but has no effect on me if juiced. I’ve learned that I may actually be allergic to celery as after the first green juice, where I thought someone had hit me on the head with a sledge hammer, I reduced the amount to no avail until yesterday when I removed it and no head slam! While I’m drinking the juices, I can eat apples and oranges with no tummy ache. A delicate but necessary detail…instead of around five visits each morning, I’m now having a much more comfortable one or two.

Please join me next week for the next five days of this juice journey where I try to decide, how much juice is enough!