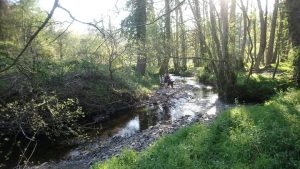 With new life shooting up all over my riverbank, how can I not be inspired?

The willow has taken hold, and shiny lime green leaves reach for the sun. 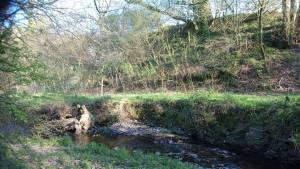 They’ve made a huge difference reducing the moisture on the bank (it used to be part of a leat running along our riverbank, over the road to the mill), and also sustaining its integrity, following the flooding swells we experienced last year.

We’ve planted over 100 tiny trees this year, with 60 little saplings getting a start in pots, still to put in.

Loki likes to accompany me down to the riverbank to help me write.

I’m delighted to announce I’ve almost reached the midway point of my tenth novel, the fifth book in the Lizzie Martin series, The Able Witch. Fancy a few lines? Having burned her hands rescuing Bilbo the dog after he knocked a candle over with his tail, this is the first time Lizzie has potted for a while…

Lizzie grasped the new lump of clay on her wheel. She missed Marsha. Into Lizzie’s mind arose the tanned, smiling face, and blue eyes sparkling with mischief, and then she thought of her own mother, Elsa, but she couldn’t pin down her features. With her eyes shut, she found herself walking the path to another world, but all was in darkness. Twitters, hoots and howls of fear and flight rose from the blackness of the forest. Strange eyes glowed. Vines, leaves and branches brushed against her body, snagging at her ankles, threatening to trip her. Grotesque shadows loomed out of the trees, into the clearing ahead. A roar echoed behind her and she turned. Slime, a dozen eyes, a mouth-like tunnel and rows of pointed teeth threatened to consume her.

“This isn’t real,” she whispered.

She opened her eyes and sat back from her wheel. The flowerpot was perfect, but the road to the land of the fae had changed. She removed the pot and picked up her coffee.

In fact, everything had changed in only a few months.  It was little wonder that the road to the underworld was no longer a pleasant one.

Today, there is no sunshine. The first of the bluebells are hiding, bending to the rain. It’s another great day to write a magical novel.