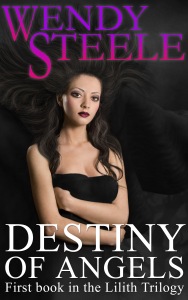 Today I’m at the Literature & Book Fayre at Lazzmatazz 2019 in Llandovery, Wales! If you’re in the area, it would be lovely to meet you. I’m signing books today, and reading at 1.30pm, but there are a host of other authors there, as well as a craft fayre.

If you can’t make it, why not download Destiny of Angels today and enjoy a magical read this weekend. Here’s an extract for your enjoyment…

With the circle around her, Lilith by her side and the Angels protecting her, Angel stood at the portal to the Path once more, displaying her conscious mind, asking for healing for this is what she sought. The air in the circle thickened around her, warm and syrupy and tasting of tin. The power increased and she saw in the darkness beyond the altar the beginning of everything, as out of the nothing came light, energy, earth, water, air and fire and from this chaotic mix, the Earth was formed and, like a wheel turning, momentum increased and from the Earth, creatures grew and died and new ones took their place and Angel saw it and knew this physical life but, she’d noticed something. Before it all began, there’d been something else. She’d felt it, seen it, no, she just knew it had existed, a tiny glimpse, a faint whisper, a mere pinprick of the Before.

The Hebrew letter hung in the air and she cried out, “Samekh!”

Angel floated through the Universe as flame and dust spiralled and spun and all the planets and stars began to form and settle into their orbit against the blue velvet darkness.

She climbed upon a silver white stallion, its wild mane and tail streaming as they rode across the sky. They sped through reeds and bulrushes, splashing mud on Angel’s feet and they galloped through showers of meteors like an arrow, flying with purpose across the sky. As she gripped the warm, strong body of the horse between her thighs, the stars and constellations showed themselves to Angel and she felt pure emotion in her heart, emotion without thought, the Force before the Form, the root substance of manifestation, that which she’d been seeking.

Angel rode on over the Welsh mountains and through the valleys, sprinkling moon dust on each pagan circle and magical gathering she saw, as the people met and embraced their Nature. Upon the horse there was no time so back she rode to the Celtic villages and on she galloped to the Dwellers in the Mountains, after The Flood.

She pulled up the mighty stallion before a sign she did not recognize and was greeted at the Temple by the Angel Raphael, the healer, who bid her enter.

Golden light bounced off the walls as she alighted from her steed and, when she next laid eyes on him, he was a centaur. Tall and proud, the handsome blond beast bowed to Angel and she took the brown zircon from her throat and bound it to an arrow. The Arrow passed to the Centaur and with his bow he let it fly and Angel knew it was the Arrow for the Swiftness of Willed Force.

and for my friends across the pond https://www.amazon.com/Destiny-Angels-Lilith-Trilogy-Book-ebook/dp/B007OX5J8O