In June, I joined a new group on Facebook, asking for short stories for an anthology. As you may know, I put myself on a one year course from September last year, to explore short stories again and after attending a great workshop by Rosie Dub of Honno Press, I had my first one accepted for publication in an anthology. I’ve had a lot more since then and have enjoyed honing the skill of writing a cracking short story so, I was intrigued by this new ‘shout out’ as the genre was Witch Lit. New to you? I’m a writer and I hadn’t heard of it so I had a think and came up with a definition of my own and wrote my first Witch Lit short story called Last Chance for Love.

A publisher had shown interest in putting an anthology of Witchlit stories together in lieu of publishing Witchlit novels. We shared our stories on the group offering help and advice and so, with this support behind me, I decided to write a Witchlit novel.

My first attempt was not good. I tried to change my writing style so it was a clunky, clumsy read and the storyline was too vague. 10k words in, I gave up…and broke my toe. This was it, I had no excuse not to write and with a big pad of paper and my trust fountain pen, I scribbled ideas and drew circles, linking ideas together until one jumped out at me and I began to write.

Today, I’ve written two thirds of the book and with a week off next week, I’m looking forward to completing it.

So what did I choose as my definition of Witchlit?

Chick Lit is a genre of fiction which consists of heroine-centred narratives that focus on the trials and tribulations of their individual protagonists. These women live in a modern world, coping with work and home life and the genre often uses lightheartedness and humour.

My Witchlit novel’s protagonist is Lizzie Martin, who lives in Romford with her thirteen year old daughter Rowan, works as a receptionist and typist. She clothes herself from the charity shops in vibrant, joyful colours with matching headbands she makes herself, attempting to hold at bay the emotional angst of an ex-husband whose girlfriend is barely out of her teens, a mother with the sensitivity of a crocodile and the big bad world from which she tries to protect her daughter. Colour is Lizzie’s armour. On her thirty eighth birthday, she is requested to bare all. There is hope though. At the bottom of the garden is a little wooden shed that Lizzie calls Sanctuary. Behind the oak and rowan trees, within its warm and welcoming walls, Lizzie surrounds herself with magic…one day, a candle spell or another, a conversation with a goddess. She consults her Tarot cards and some day, she will paint in that shed.

This month I also published the third book in the Standing Stone Series – The Gathering. Linked together across space and time, Rachel, Candy and Fern each work towards ‘a gathering’ of their own, guided by the goddess Rhiannon.

You can buy all my books via my author pages at

I do hope you’re enjoying the Standing Stone Series…just wait for book five! This young man seems to be enjoying it. I spotted him at a Steampunk event we were dancing at and asked if I could have a photo. 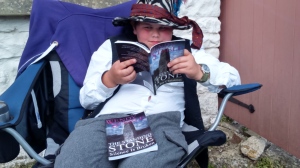 At this same event, I bought myself a present…I know it’s a children’s book but it’s beautiful.

Research is still ongoing with the third book in the Lilith Trilogy, Angels and Demons…I save it for rainy days I can spend in the library. I’ve written fewer short stories this month, only managing to submit one so far but there are only so many hours in the day.

I would love to hear your thoughts about Witch Lit. I love the idea of a light hearted, fun read where I can empathise with a protagonist but laugh with her too and know all along, that she’s a Hedge Witch like me.