The mood has been low at the Crazy Cat Camp, very low so yesterday, we went for practical solutions and built a bed off the floor and levelled it out. We’d been sleeping on a 1:6 hill we worked out so, last night was positively luxurious…though we were awake half the night as the rain and wind battered the tent.

Some evenings are beautiful though and we’ve enjoyed sitting outside until either the rain, cold or insects drive us in. 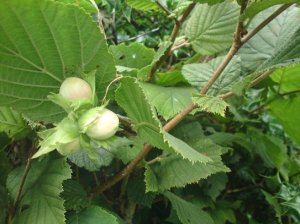 So, we’ve got our sleeping conditions as best as we can and our attentions will be turning to the awning where we are cooking. At the moment, we’ve a double burner on a low table with plastic legs and it’s served us well but it’s buckling. The ground slopes even more than the sleeping tent so Mike wants to lay a floor(!) and build some shelving which will accomodate the cooker and the sink.

We’ve had lots of one pot meals tarka dahl, stir fry and vegetable curry. I’d bought two jars of curry sauce but we’ve only eaten one and I’m now cooking from scratch, having located a box with some spices in. Keeping food cold is a real problem (a kind neighbour refroze our blocks once but we feel awkward keep asking) so food has to be bought and eaten quickly. Mike’s almost given up on milk in his tea and we’ve abandoned cereal as we can’t get through a pint or a carton of soya milk quick enough.

Mike is The Toast King (thank you Lisa and Deana of Tribal Unity for our camping toaster…and replacement) and we have toast with everything. Weight watchers tomato soup has been my saviour while Mike enjoys mushroom while dessert has been restricted to frozen mixed berries with meringues or chocolate. We bought a box of salad today and ate it all for lunch.

Meals depend on the weather and how we feel. We adore jacket potatoes and sweetcorn cooked in the fire but, if the wind is too strong, the cinders and ash are blown out of the fire pit and leave nothing to cook on.

The photo is of hazelnuts, abundant in the hedgerows but already being scavanged before they are ripe, which is a shame. The blackberries are also beginning to grow, though we munched a couple on a walk the other day and they’re very sour.

We’re washing ourselves in a large purple trug and it works quite well though it’s only just possible to sit down in it. The sun needs to be on the tent though or you’re shivering too quickly. I can wash my hair in it too and there’s a clothes line up in the awning which dries towels really well.

At the moment, we’re washing up outside and putting clean stuff in the trug before drying…as we’re on a slope, everything slides off the outdoor table and if the wind is blowing, you don’t stand a chance!

We’ve been really lucky with the weather through August but now September is here, the evenings are getting colder. 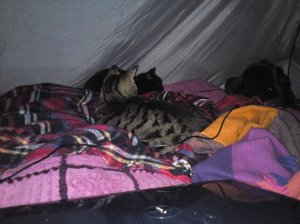 The cats are loving snuggling up with us and have been exploring all around the farm, especially Rowan.

Everything takes twice as long to do in a tent. We fetch our water from the dairy down by the front barns and the kettle is boiled often and our flasks filled. There’s been many evenings we’ve realised the sun is setting (about 8.30pm here) and we haven’t had dinner…or washed up from lunch so we end up blowing out dinner and having soup and toast instead! Washing ourselves needs even more planning as you need two flasks full and a kettle plus cold water to execute the full works.

We’ve found a fabulous shop in Lampeter that does service washes and they wash and dry our clothes and bedding in a day and are very reasonable. I’ve done washing in the trug twice but you need a really hot day to get the clothes dry and jeans were hanging in the awning for days so I’ve given up on that idea.

So, what do we do in our tent? If we organise our power, we can get an hour or so on the internet each day, sometimes more so, we can watch an episode of QI, a spot of athletics or I can get online here. We’ve played cards and yahtzee but not scrabble as the cats love to join in. We’ve joined the library and are reading oodles of books.

Next time I hope to have uploaded more photos from my new phone and can show you the new bedroom so do join me again.